Conservationists could gladden all the fans of live webcams with a footage about the life of the eagles’ never seen before. Since a few hours, anyone can enjoy watching the life of an Imperial Eagle pair and hope for the fledglings to leave the nest without problems.

The plumage of the chicks is still a mixture of downy and fully grown juvenile feathers. Anyone interested in the life of them better hurry because experts say they will try their wings within a few weeks. 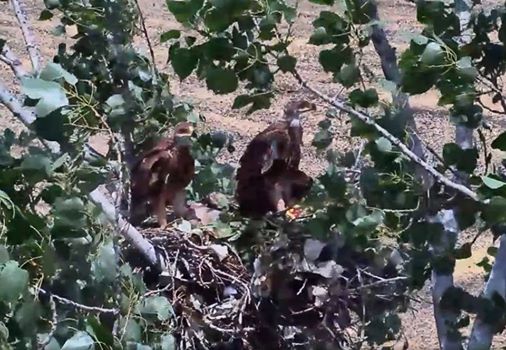 The view of the camera with the growing chicks.

Immense work, lots of patience, experience and a pot of luck needed to succeed with live broadcasting eventually. Imperial Eagles are very cautious. They are rare visitors even at the winter feeding station established primarily for them. Furthermore, it is almost impossible to guess which nest would be used from the ones in the territory any given year. That was what happened this spring, when we deployed cameras to a nest, however, it was used by Kestrels instead of Imperial Eagles. Nevertheless, life of the Kestrel family was more than exciting. Their first clutch fell prey to a marten, but the second one survived, and now anyone can follow how the downy chicks grow day by day. The local Imperial Eagle pair nested on a poplar tree not too far away from here.

Yesterday, under the supervision of the ranger service of the Hortobágyi National Park, the chicks were ringed. In the meantime, nature filmmakers could install a camera to a nearby tree. Its quality is not perfect but at least it does not bother them at all and the experts are sure that it will not threaten the nesting. The camera keeps recording night and day, so conservationists can keep a watchful eye on the nest continuously.