Bird of the year 2012: The Common Buzzard, our most common raptor is the most common victim of illegal poisoning incidents as well

The Common Buzzard is the commonest, most widespread raptor species both in lowlands and mountainous areas. They are usually mistakenly believed to be “eagles” by the general public. Since they prefer perching next to busy highways and roads taking advantage of the managed (grazed or mowed) grassy habitats running parallel to those, many people can see them basically everywhere. However, it was not always, like that. 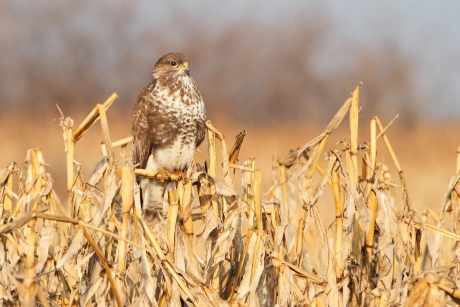 Due to persecution and the lack of nesting trees in the Great Hungarian Plains in the past century made them move up and nest in hilly or mountainous areas.

Electric lines cause a sizeable mortality among them because they like to perch and hunt from pylons. Illegal poisoning also has been posing a serious threat to the species lately.

There have been more than 1000 protected or strictly protected raptors killed by direct poisoning recently; however, the total number of casualties are probably many times more than that, because the majority of the cases never get revealed. Among the poisoned birds there were almost 300 Common Buzzards (29%), making the species to be the commonest victim to poisoning.